Oxford University Press has recently released the second edition of Social Policy in Canada, co-authored by the father-daughter duo of Ernie Lightman and Naomi Lightman. I recommend this book as an excellent resource for students of social policy. It will be useful for classroom instruction, while also being a handy reference for researchers, persons who design and administer social policy, and persons who advocate for improved social policy. 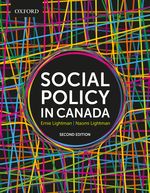 Here are 10 things to know:

1. The book does an outstanding job of explaining important ideas in very succinct ways. Chapter 1 explains that low-income earners benefit greatly from Canada’s ‘tax and transfer’ system—since our tax system taxes the rich more than the poor, and then redistributes this income in ways that tend to benefit lower-income households. Chapter 4’s discussion of the family—and why it can’t be relied on as the only source of poverty alleviation—is very good (but should appear much earlier in the book, and should have included a consideration of how some families are more effective than others at advocating for social services for their own family members).

2. Many of the visuals are very helpful. Figure 1.2 shows strong correlation between income inequality and social problems across wealthy countries. Figure 7.9 tells an important story about reduced rates of poverty for Canadian seniors over time (it shows that, since the mid-1970s in Canada, median income for seniors has risen steadily). Figure 10.2 (a line graph showing average charitable donations in Canada as a percentage of household income) is excellent—it suggests that lower-income households are more generous with their income than higher-income households. Figure 10.4 shows the percentage of household income (broken down by quintile) that is spent on games of chance in Canada; this makes it clear that spending on games of chance, as a percentage of income, is much higher for lower-income households than higher-income households. Further, many of the visuals found in the book’s three appendices are very helpful—incidentally, all three of the book’s appendices are excellent (one looks at the use of comparative data across different countries, and the other two introduce the reader to CANSIM).

3. The book provides excellent suggestions for further reading. It does this primarily in its Suggested Resources section at the end of each chapter. I was introduced to dozens of resources that I didn’t previously know about and am grateful for this. Along these lines though, I do have one criticism: the book makes no mention of Canadian Social Research Links, which I believe to be one of the most important resources on Canadian social policy.

4. The book doesn’t provide a succinct definition of social policy. Chapter 3, called “Defining Social Policy,” doesn’t actually define it. That chapter even includes a four-paragraph section that attempts to define the term, while acknowledging that the term lacks “an agreed-up meaning” (p. 64). Personally, I think it can safely be said that social policy refers to public policy pertaining to how people live and work together as a society. It includes a range of programs and other measures related to the regulation of marriage, family, children, birth, employment, unemployment, income, education, housing, illness, disability and death. It includes legislation and regulations established by all orders of government.[1]

5. I find some of the concepts introduced to be rather unhelpful. Speaking as someone with 10 years of front-line experience working directly with low-income persons and many more as a researcher, I found the following concepts unhelpful: primary distribution (p. 6); secondary redistribution (p. 7); vertical redistribution (p. 8); horizontal redistribution (p. 9); the public burden model of welfare (p. 67); the handmaiden model of welfare (p. 68); legitimation (p. 69); indifference (p. 72); interdependence (p. 72); horizontal and vertical equity in tax policy (p. 208); the non-excludability and non-rivalness of public goods (p. 238). To be blunt, I have not found occasions in either my front-line work or research where such concepts have been useful.

6. Chapter 5’s consideration of privatization is very good, but has a few shortcomings. The chapter does an excellent job of laying out the many arguments in favour of privatization, as well as the many shortcomings of privatization. In fact, that chapter on its own makes for a great stand-alone reading! But I found it disappointing that, as examples of privatization, it discussed road tolls (p. 123) and the privatization of garbage (p. 141); instead, the book should have discussed the privatization of long-term care for seniors in Canada (including the cases of British Columbia and Alberta). It could have also discussed the final report from the Mayor’s Task Force on Toronto Community Housing Corporation (TCHC), whose very first recommendation was to “[t]ransition to a new community-based non-profit housing corporation…at arm’s length from the City.”

7. Chapter 7’s discussion of universal vs. targeted benefits is excellent, even if it complicates the debate needlessly. I think a good distinction for the authors to have made would have been between universal benefits, on the one hand, and targeted (or means-tested) benefits, on the other. Regrettably, the authors also provide definitions of an “income test” and a “needs test” (neither of which will help most readers).

8. Chapter 8’s consideration of taxation is very comprehensive. I especially appreciate the explanation of the different goals of taxation, the important distinction between marginal tax rates and average tax rates, and the succinct discussion of tax expenditures. One criticism I have of this section, however, is that it states that “the values embedded in the Alternative Federal Budget (AFB) have not, as yet, made their way into the corridors of power in Ottawa…” (p. 230). Prior to the 2015 federal election, I would argue that this was an accurate statement. However, as I wrote earlier this year: “[I]t’s abundantly clear that the Trudeau Liberals’ 2015 campaign platform was strongly influenced by the previous year’s AFB. In fact, staff at the [Canadian Centre for Policy Alternatives] estimate that 30% of the previous year’s AFB found its way into the Trudeau Liberal platform.”

9. Chapter 10, titled “Volunteers, Charities, and Gamblers” tries to do too much. These three topics, while loosely connected, are too different to be combined into one chapter. I think this chapter should have put more focus on the charitable sector, and less on volunteering and gambling.

10. The book has omissions that I hope the authors correct in the next edition. For example, Chapter 2 states that the Conservative government of Stephen Harper “dismantled social programs incrementally…” (p. 47) but fails to note that, on an annual basis, the Conservatives spent roughly twice as much on affordable housing as the Liberals did before them. Chapter 2 discusses the importance of blogs in shaping social policy discussion, but doesn’t mention the blog of the Progressive Economics Forum (full disclosure: I’m a frequent contributor to that blog). Chapter 3 discusses various measures of poverty, but fails to note that the Low Income Cut Off (LICO) hasn’t been rebased since 1992 (which means it’s quite misleading when some people point to the declining proportion of Canadians who lie below the LICO over time as a success story). Chapter 6, in providing an example of stigma, should have discussed the stigma associated with social assistance (see point #8 of this previous blog post) rather than discussing the stigma of publicly-subsidized eyeglasses in England in the 1960s. And when discussing user fees in Chapter 9, instead of discussing user fees in Saskatchewan’s health care system in the 1968-71 period, the book could have discussed post-secondary tuition fees today.[2] Finally, Chapter 12, which focuses on the future of Canadian social policy, missed several important opportunities—it ought to have discussed Canada’s aging population and the impact this will have on Canadian social policy. Chapter 12 also should have discussed the social policy implications of the increase in one-person households across Canada; the evolving ethnic composition of Canada’s population; and the increase in Canada’s linguistic diversity.

In Sum. I used the first edition of this book when I taught a third-year undergraduate course at Carleton University in 2013. If I ever teach a similar course again, I’ll definitely assign this second edition as mandatory reading. The authors should be congratulated on a job well done!

[1] My long-time social policy mentor, Allan Moscovitch, helped me come up with this definition.

[2] Tuition fees are discussed in Chapter 1, but in a different context.