Krugman on inequality in the USA

Paul Krugman has a new blog through the NewYork Times (and it is not subscriber only!). Here’s an excerpt from his first post, about the story on inequality over the past century: 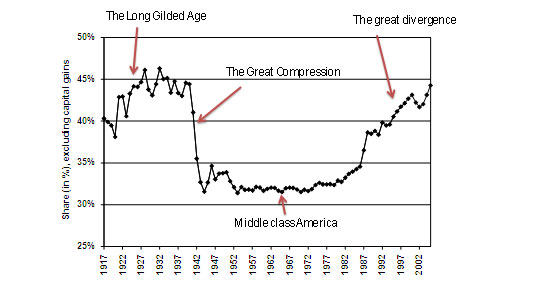 The Long Gilded Age: Historians generally say that the Gilded Age gave way to the Progressive Era around 1900. In many important ways, though, the Gilded Age continued right through to the New Deal. As far as we can tell, income remained about as unequally distributed as it had been the late 19th century â€“ or as it is today. Public policy did little to limit extremes of wealth and poverty, mainly because the political dominance of the elite remained intact; the politics of the era, in which working Americans were divided by racial, religious, and cultural issues, have recognizable parallels with modern politics.

The Great Compression: The middle-class society I grew up in didnâ€™t evolve gradually or automatically. It was created, in a remarkably short period of time, by FDR and the New Deal. As the chart shows, income inequality declined drastically from the late 1930s to the mid 1940s, with the rich losing ground while working Americans saw unprecedented gains. Economic historians call what happened the Great Compression, and itâ€™s a seminal episode in American history.

Middle class America: Thatâ€™s the country I grew up in. It was a society without extremes of wealth or poverty, a society of broadly shared prosperity, partly because strong unions, a high minimum wage, and a progressive tax system helped limit inequality. It was also a society in which political bipartisanship meant something: in spite of all the turmoil of Vietnam and the civil rights movement, in spite of the sinister machinations of Nixon and his henchmen, it was an era in which Democrats and Republicans agreed on basic values and could cooperate across party lines.

The great divergence: Since the late 1970s the America I knew has unraveled. Weâ€™re no longer a middle-class society, in which the benefits of economic growth are widely shared: between 1979 and 2005 the real income of the median household rose only 13 percent, but the income of the richest 0.1% of Americans rose 296 percent.

Most people assume that this rise in inequality was the result of impersonal forces, like technological change and globalization. But the great reduction of inequality that created middle-class America between 1935 and 1945 was driven by political change; I believe that politics has also played an important role in rising inequality since the 1970s. Itâ€™s important to know that no other advanced economy has seen a comparable surge in inequality â€“ even the rising inequality of Thatcherite Britain was a faint echo of trends here.